The collection of ancient scientific instruments that is gathered at the Royal Seminary of Bergara is composed by 232 objects belonging to the different physics and chemistry offices that the institution has had. There are valuable pieces from the XVIII century; a small compund of chemistry lab tools and a good number of physics tools that used to belong to the different fields that were part of Science during the 19th century. Documents confirm that there were chemistry labs and physics offices inside the Royal Seminary at least from 1778 to the first decades of the 20th century. 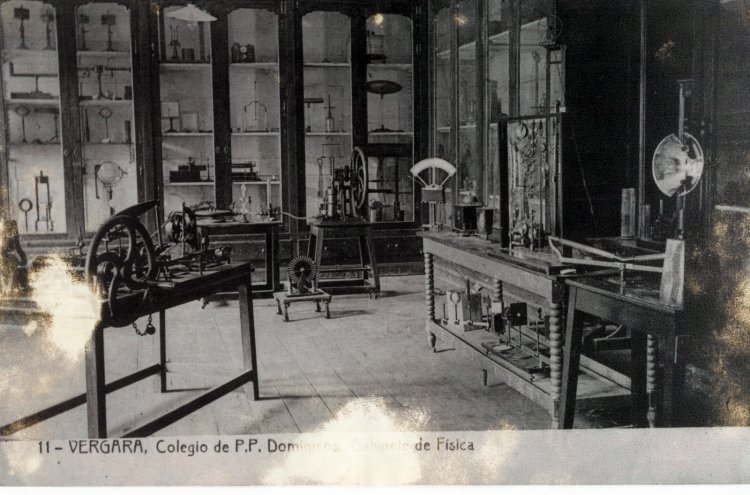 This laboratories and offices were provided with high quality scientific tools. Most of it was acquired in the best and most renowned ateliers in Europe (London, Paris and Berlin). The collection of the Royal Seminary is, therefore, a faithful reflection of the development of the industry of laboratory tool making of the 19th century. At the same time, we can see on it a lot of the scientific equipment that can be found in most of the books from that time. This way, our compound of pieces informs us about the evolution of physics and raises as a perfect example of experimental physics, essential complement of the theoretical teaching of this branch of science during the 19th century.

Newtonian or classic Physics was soon adopted by England and later on by the rest of territories in Europe during the XVIII century. On the other hand, during the second half of the XVIII century, Europe lived the last step on the Scientific Revolution: the discovery of modern chemistry. Following the guideline of classic mechanics the different fields that composed physics were very developed during the XIX century, especially electricity and magnetism, and thermodynamics. For the first two, the investigations led by Volta, Ohm, Seebeck, Oersted and Faraday were really important, and related to thermodynamics, the important ones were led by Sadi Carnot, Joule, Boltzmann, Maxwell and Gibbs.

The evolution of Physics during the end of the XVIII century and part of the XIX century on the different branches above mentioned, had a punctual reflection in the Royal Seminary of Bergara. The collection of ancient scientific instruments that the Royal Seminary of Bergara keeps is composed by 232 objects that come from different physics and chemistry offices that the institution has had. Valuable pieces from the VIII century are kept, such as the dilatometer (AZT-0174), done by the constructor Juan González, who made the instruments for the University of Salamanca. The museum also preserves a small ensemble of chemistry laboratory tools and a good number of physic’s tools that belonged to the different fields that were part of the branch of physics during the XIX century (mechanics, acoustics, thermodinamics, optics, electricity and magnetism). The documents confirm the existence of chemistry laboratories and physics offices in the Royal Seminary from at least 1778 up to the first decades of the XX century.